There are articles about SATs stress all over the place at this time of year. Some, inexplicably, with an overall tone of surprise that putting children under pressure leads to a decline in their overall mental health. All with depressing statistics and anecdotal evidence from parents/carers, teachers, children’s charities and other educational professionals.

As I read, and my blood pressure rises, there is a strong temptation to write an expletive-sprinkled rant on the subject. Cathartic as that might be for me, it’s not exactly adding anything positive to the situation.

Instead I present you with short reviews of two amazing books that seem particularly useful at this time of year, on the off chance that you haven’t come across them yet. They both have a main character that is consumed by worry.

How can I use them to help children deal with SATs stress?

As a family member, a story is a great way to initiate discussions about tricky feelings at a safe distance. Talking about worried characters is less pressure than delving straight into what is worrying them.

They can also be the springboard for you to help your child to work out strategies for dealing with worry and stress. Trying out the ideas in the books, telling them what works for you and researching other solutions (like meditation) lets them see that this is a common human state. Identifying what they are feeling and developing their own coping mechanisms is more important than any tested subject matter. They will definitely be faced with further stress and worry – it is highly unlikely that they will ever be required to define a fronted adverbial again.

If you’re a class teacher, they both have several cross-curricular possibilities alongside the obvious PSHCE learning objectives, as well as being perfect end-of-the-day stories. I’m sure you can see the potential yourself.

As a senior manager, they are also superb assembly content; as a one-off, or as a sequence of assemblies. Picture books are just as valuable to Key Stage Two as the younger children. I used to love seeing the Year Six children visibly relax during a story in assembly. Or perhaps you could go in and read that end-of-day story – let your teachers also feel the benefit of listening to a story.

Anyway, enough of my ramblings, let’s get to the good stuff!

‘The Huge Bag of Worries’ written by Virginia Ironside, illustrated by Frank Rodgers 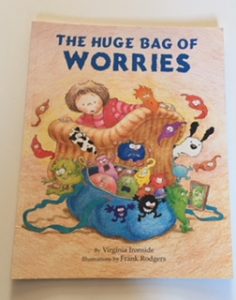 Jenny is our thoughtful hero. When we first meet her, she’s sitting in her bedroom chatting to her dog (Loftus):

“Jenny has always been happy. She had a lovely mum and dad, a great brother (well, most of the time…), she had a best friend at school and she liked her teacher. And then, of course, there was Loftus. But recently she had been getting gloomier and gloomier. It wasn’t just one thing. It was everything.”

I love that there is no specific reason given for Jenny’s feelings. Eliminating the ‘but she’s got nothing to worry about’ argument. Just because she has not suffered a major trauma and has many good things in her life, doesn’t mean that her feelings aren’t real and valid.

A whole host of worries crowd Jenny’s thoughts until she has a huge, blue bag filled with them. The illustrations expertly show them as a variety of multicoloured little monsters with a variety of expressions. She discovers that they follow her everywhere – even to the toilet!

Just as she feels destined to carry these worries forever, her kind next-door-neighbour insists on taking a look and helps her unload her burden by sorting through all the different worries with her.

It’s a lovely way to emphasise the importance of sharing our worries with someone. It also demonstrates that not everything we worry about is our burden to carry – the first thing Jenny’s rescuer does is organise the worries and some belong to other people. This is a good way to discuss perspective and perhaps create a catastrophe scale.

At the very least, ‘The Huge Bag of Worries’ tells all the isolated worriers out there that they are not alone – empowering in itself.

Making individual ‘bags of worry’ is a useful way to communicate issues that might be difficult to vocalise. Drawing each worry makes it more tangible and sometimes easier to describe than a raw thought or feeling.

I’ve done this several times with classes of children where they take their bags home with them and their homework was to share with a family member. I was surprised by how many parents said they’d no idea their child was worrying about a particular issue (like gaining weight) and they were pleased this gave them the opportunity to talk about it. 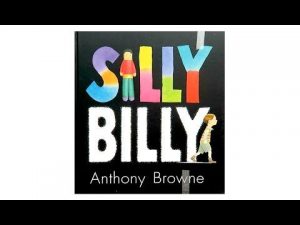 Here we have lovely Billy, who cannot sleep for worrying about all manner of things. He, with much reluctance, eventually tells his grandmother how he is feeling and she gives him some worry dolls that have helped her with the same problem. The dolls don’t magically take away Billy’s worrying, in fact he eventually worries about the worry dolls! But he does learn to turn his worry outwards and show it as caring to the dolls and then his friends – basically, everyone gets handmade worry dolls! 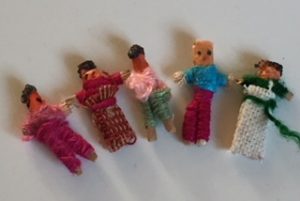 As you would expect, Anthony Browne’s work is best explained in his own words.This is an interesting clip of an interview  in which Anthony Browne discusses the theme of anxiety and use of colour in Silly Billy. (It’s only 3.23 minutes long!) This clip is from the same interview and is about his creative process writing Silly Billy . (5.43minutes) 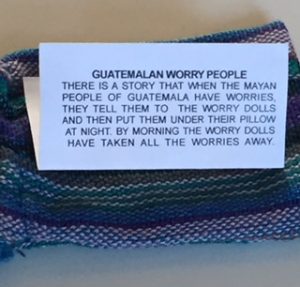 I was lucky enough to hear Anthony Browne speak at an Institute of Education Literacy conference a few years ago and found him highly engaging. He has a very gently, unassuming manner and is explains his creativity in a very accessible way. As an aside, I highly recommend taking any opportunity to listen to him.

Making worry dolls is an obvious next step after reading this wonderful book, at home or in school. Giving ‘Silly Billy’ and some worry dolls together as a gift for a worried child (or adult!) is a lovely way to say that you understand.

I know these books have been around for a while now and there are loads of others with similar messages. I just love these two and, due to the genius of their creators, found that children always actively engaged with their themes.

If you are concerned about a worried little person in your life, they are highly recommended. Or if you are acutely aware that the atmosphere in your school is somewhat pressurised, they are a small safety valve of understanding. Enjoy your story time!

Featured image: Pixabay, Cover of ‘SIlly Billy’ Google images (as a random supply teacher walked off with my copy, and yes I am still bitter about it!)