And so begins the first of my four Christmas blogs. Trees, food, films and great books to buy for children – not necessarily in that order.

Unashamedly Christmassy. Hopefully not straying too far into too cheesy.

Christmas trees have always been a favourite part of Christmas for me. I like other types of decorations. But the combination of tiny lights, sparkle, shiny baubles and miniaturised things can’t be beaten. This is just a little mish-mashed appreciation of their magic.

This is the 17th year that St Mary’s Parish Church in Melton Mowbray has hosted the Christmas Tree Festival. I went on Sunday and it was just lovely. Local charities, businesses, schools and individuals all contribute their own Christmas trees. Some are traditional trees and some have a more unique take! It runs across the first weekend in December, from the Friday to the Tuesday. It only costs £2.00 to be infused with all the festive loveliness.

For those with a practical concerns:

It usually coincides with the town’s Victorian Christmas Market week end, so there’s a lot to see and, best of all, eat! (Feeling like a bit of a tourist guide now!)

Obviously, you’d rather see some of the trees, than have me rambling on! Here you go…

SG Woodturning’s ‘Hand Made in Wood’. 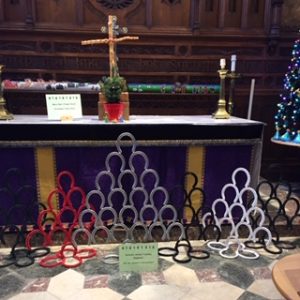 Handcrafted trees made out of Army horseshoes. Created by Army farriers.

There was the opportunity to participate in a silent charity auction to win one of these stunning trees. 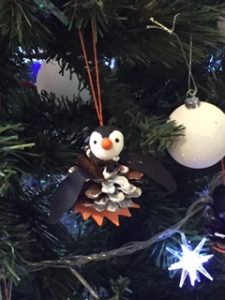 Look how cute this little fella is! Pine cones into penguins.

Creative plumbing company made this one. A cascade of tools! 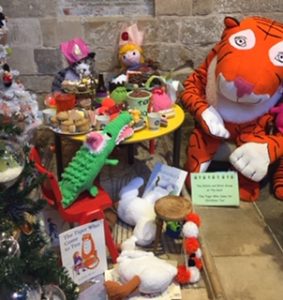 An entirely knitted ‘Tiger Who Came To Christmas Tea’ tableau by The Stitch and Bitch Group at The Boat. There’s even knitted pork pies! 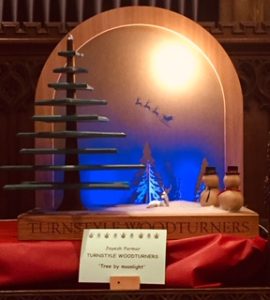 My apologies that I haven’t included all the details of each tree. I was permanently in someone’s way, it was so busy, and hadn’t noted all the information I thought I had.

This video is from 2014, but it gives you an idea of how beautiful the church interior is and just how full of Christmas trees it is!

Do you know the story of the Trafalgar Square Christmas Tree?

Yes? Then you can skip this bit.

Every year, I remember the first time I heard this story while watching Blue Peter.

I just really love that the tradition has continued. It’s actual Christmas spirit at work.

So, what’s the story?

For those of you who don’t know…

Once upon a time, in 1947 to be precise, the people of Norway decided to send the UK a Christmas present. This was to thank them for their support during the WW2. Every year since, Norway sends a huge Norwegian spruce to the UK at Christmas time. The most famous one is decorated with traditional Norwegian vertical lights, displayed in Trafalgar Square in London and switched on in a ceremony with guests from the Norwegian embassy in attendance.

The rather understated plaque that sits underneath reads: ‘This tree is given by the city of Oslo as a token of Norwegian gratitude to the people of London for their assistance during the years 1940-45.’

“During the Second World War, Great Britain was Norway’s closest ally. This was where the Norwegian King and government fled as their country was occupied, and it was from London that much of Norway’s resistance movement was organised.

Both the BBC and its Norwegian counterpart NRK would broadcast in Norwegian from London, something that was both an important source of information and a boost of morale for those who remained in Norway, where people would listen in secret. Because radios were, of course, forbidden by law by the occupants.”

During the course of me trawling the internet looking for the memorable Blue Peter episode, I discovered that other British towns also receive Christmas tree presents from other Norwegian towns. Does yours? (Never did find the Blue Peter episode.)

Thought I’d share this article by Dave Hill for On London, because it contains some Pathe news clips showing the tree’s arrival in different years. (The third one doesn’t have sound.)

This is a Newsround clip from 2017, the 70th anniversary year of this lovely international thank you gift. It is totally child friendly, should you want to show your little ones. (And it’s short.)

Told you it was lovely.

Get this in your ears!

A Christmas classic. No explanation needed. Bop away!

Show us yours then!

Mine’s not up yet. (Need to do my pre-tree clean first!) I’ll post a couple of random pictures when it’s done. Might even update on here. I love unwrapping all the baubles – I have always forgotten some the odd one, so it becomes a delightful little surprise. My greyhound ones are always my favorites!

I’m incredibly interested in (nosy about!) about other people’s trees. Post your pictures here – share the festive tree joy! Give us a decoration favorite close up and a full length shot, please and thank-you.

If you liked this blog, you’ll probably like my upcoming blogs on:

These will appear randomly, in no particular order! I’m reliable like that.