Woohoo! I’m writing this partly in celebration of World Gin Day. And partly to share my enthusiasm for my writing work. I’ve got to get it out somewhere!

Warning: There will be an overabundance of exclamation marks that I’m not apologising for or editing out.

“Imagine if one day I actually get paid to write about gin!” I said to my good friends, as we happily drank some gin one evening. This was a little while ago as I embarked on this writing malarkey.

And then ‘one day’ arrived!

I attended a networking event held by KuKu Connect at Pera in Melton Mowbray. I’m not a networking pro and, I’ll be honest, it was the promise of a free gin that got me there.

It was a busy event with about seven local businesses there with their wares, lots of other business people and VIPs.

Here I am at the Brentingby Gin stand. Found my best angle – bird’s eye view! 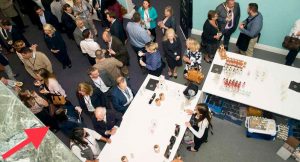 I was much happier with a lovely gin in my hand! That’s the lovely Rachel, of She Sparks with me (left). 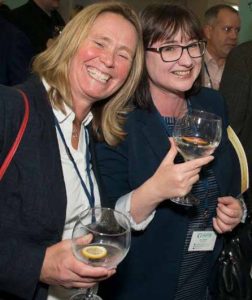 I didn’t get to speak to the distiller on the night, but I did send them a thank you card after the event.

A few months later, Bruce got in touch and my ‘writing about gin’ job began. I was involved in their website revamp, which now (delightfully!) includes some of my words.

I’m not claiming credit for all the text on there and I definitely did not write the actual tasting notes – that requires an expert in the field. But this did get me thinking about how we describe taste and smell…perhaps a later blog post.

These are a few of my favourite things…

This job certainly incorporated several of my favourite things.

Despite my amateur enthusiast status, I’d never been to a gin distillery before. Brentingby Distillery slots into the Leicestershire countryside as if it’s always been there. The still itself is called Ayanda and she is beautiful. Bruce is from South Africa and Ayanda means proliferation, or augment, in isiZulu. She is a 10 plate copper column still that Bruce designed and put her together himself.

She has portholes, like a ship. In her entirety, she’s like a giant’s instrument, an enormous cross between a tuba and trombone. I didn’t expect to be so taken by how a still looks, but I was.

When you buy Brentingby’s original London gin in its distinctive copper bottle, it’s like you’re taking a little bit of her home with you. And I think it’s great that they open up the distillery for tours, so more people can meet her.

It’s not always possible to meet clients in real life, so it was great to talk to Bruce face-to-face. He absolutely loves gin, focuses on creating high quality and is very straightforward in his communication. My job was listen carefully, ask some outsider questions and then go away corral all his enthusiasm and expert knowledge into the right words.

At Brentingby’s, they are very involved in the local community so Bruce wanted some research done on the history of the local area. I’d already visited Melton Carnegie Museum a couple of times and knew that’s where I could find all the necessary background knowledge. It is a relatively small, but perfectly formed museum.

I set myself a limited time and whizzed round, paying particular attention to the information and artefacts about local agricultural development. This is not how I usually amble around a museum! They have a great section that is set out like a street, with different types of shops including, rather unsurprisingly, the pork pie and Stilton cheese feature heavily.

We are so lucky to have such free resources in our communities. Museums are like collective memory boxes, containing all kinds of treasures. I realise we must interrogate them like any other historical source, but they are certainly a concrete way to examine the parts of our past gathered there.

Part of my brief was to research the History of Gin and a wonderful story it is!

Here are three of my favourite facts that I learned while doing this particular job. 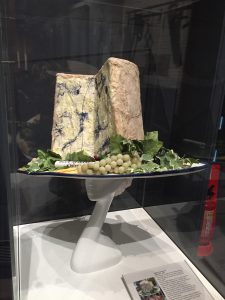 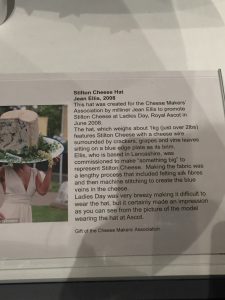 Yes, I’m ending on a ‘woohoo’! I love the research, meeting new people, seeing new places and learning new stuff elements of all my writing work. It was like a little extra treat to be working on something for which I already have a strong interest.

Other treat topics would be: books, language, coffee, fudge, chocolate, literacy education, champagne and cake. You know, just in case any of you are in one of  these businesses and want to work with an over-enthusiastic writer! I’m yer woman!

All the photos from the networking event were shared by KuKu Connect on social media after the event at Pera Business Park. Edited by me.

I took the lower quality ones in the museum.